A review of Old-Earth or Evolutionary Creation? Discussing Origins with Reasons to Believe and BioLogos

Should we react to the news that more Americans are accepting evolution with joy or sorrow? It depends on your answer to one key question.

A 2017 Gallup poll shows that the number of Americans who accept evolution has increased since 2014. But while more Americans accept atheistic evolution, more Americans also embrace theistic evolution. The organization BioLogos, founded by leader of the Human Genome Project Francis Collins, has no doubt contributed to the growing acceptance of what the organization calls “evolutionary creation.” This is the view that evolutionary science is “the best description for how God brought about the diversity of life on earth.”

So, surprise! Some creationists affirm evolutionary theory. But there’s another alternative to young-earth creationism also firmly within the evangelical tent. Founded by astrophysicist Hugh Ross and currently backed by a team of three other scientists and a philosopher-theologian, the evangelistic ministry Reasons to Believe (RTB) represents an additional view of origins called old-earth-creationism. While RTB affirms the ancient history of the universe, they reject evolution.

In light of this growing diversity of opinions on creation within the evangelical world, InterVarsity’s 2017 publication on the topic comes at a good time. Old-Earth or Evolutionary Creation? Discussing Origins with Reasons to Believe and BioLogos, edited by Kenneth Keathley, J. B. Stump, and Joe Aguirre, is a must-read for anyone wanting to learn more. To make the book as ecumenical as possible, a group of Southern Baptist seminary professors (on the conservative end of the evangelical spectrum) guide the dialogue with helpful questions and comments.

From the title, readers may expect the biggest takeaway to be the scientific arguments “for and against” evolution. But readers of Discussing Origins may come away with more questions than answers. And if they’re reading closely, they will face one question in particular at the center of it all.

The authors resist labelling Discussing Origins a “debate book.” Though the book is a dialogue between the three groups, the authors note they can’t possibly resolve all the big questions within two hundred pages. Instead, they focus on sharing their respective positions and modeling how Christians can engage in respectful conversation.

“Because of our shared love for Christ, who calls the church to unity, and our shared excitement for studying God’s creation,” the authors write, “we were able to find the common ground needed for genuine dialogue about our differences.” True to their mission, the authors maintain a tone of respect toward one another throughout their discussion.

For a book on origins, it takes the authors quite a bit of time to sink their teeth into the evolution discussion. The book begins with six excellent chapters on topics including Biblical interpretation, natural evil, divine action, and methodological naturalism. Only the final four chapters tackle the geological, fossil, biological, and anthropological evidence for evolution.

This is not to say the book’s discussion of the evidence is unhelpful. But in the build-up, it becomes clear that the book is not really “about” evolution at its core. Instead, the authors seem to agree that what divides them is the answer to a different question. Do Christians have to reject mainstream science, they ask, or can we accept it?

The real point of disagreement

BioLogos President Deborah Haarsma brings up this area of contention from the very beginning. One of her critiques of RTB, she explains, is that the old-earth organization “requires a Christian scientific picture to differ from mainstream science.” BioLogos, on the other hand, endeavors to show the harmony between the scriptures and established views held by the majority of scientists.

Indeed, RTB claims that because of the doctrine of special grace, parts of their creation model necessarily contradict mainstream science. In their model, the scientific disciplines which differ are those “that touch most closely on the exceptionalism of the nephesh animals” (that is, the soulish animals with “mind, will, and emotions”) and the sciences related to issues of salvation (such as human exceptionalism and sinfulness).

The question of being distinct from secular science resurfaces in chapter ten, when Darrel Falk of BioLogos insists that belief in the Bible does not demand “the dismantling of that which lies at the heart of the biological sciences.” RTB, he says, teaches the opposite assumption.

Of course, the reasons for RTB’s resistance to mainstream science tie back to their evangelistic mission. In chapter seven, Fuz Rana of RTB gives a number of scientific reasons for his rejection of evolutionary creationism. But his theological objections suggest they are his weightiest concern.

“The problem I have with adopting [biological evolution],” Rana writes, “is that it isn’t clear how to distinguish between an evolutionary origin and history of life that is under God’s auspices and one that is merely an outworking of natural processes.” “It is incumbent on us to distinguish our models from those that are materialistic,” Rana writes, and “identify places where God has intervened in life’s history.”

Evangelicals like Rana, in other words, worry that evolutionary theory is convincing society there is no need for God. If this is the result of evolutionary theory, the logic goes, then it’s up to Christians to develop a more complete model with Jesus at the center.

From this perspective, it’s easy to see how RTB’s model may be more appealing to many evangelicals than that of BioLogos. RTB’s model embraces much, but not all, of mainstream science, and importantly leads students directly to Jesus—not just to a vague concept of God.

Nevertheless, one wonders whether there’s a danger to RTB’s methods, which include making scientific predictions based on the Bible to showcase its total inerrancy. “Is it not possible that RTB could make a testable scientific prediction based on a mistaken interpretation of Scripture … and someone rejects either Christianity or the Bible as the result of poor hermeneutics rather than good science?” Southern Baptist moderator Robert Stewart asks. Such mistakes would certainly undermine their entire mission.

The focus of BioLogos, meanwhile, is “keeping Christians from leaving the faith over perceived conflicts with science” rather than converting non-Christians, although they admit both organizations are concerned with multiple audiences. It makes sense, then, that BioLogos would wish to emphasize their similarities with mainstream science, instead of stressing the differences.

At the same time it’s important to note that the evolutionary creationists are engaging in their own, small-scale resistance. Merely by using the term “creation,” BioLogos shows their faith is more important to them than acceptance by secular scientists. Proudly self-identifying with such a word is bold in a society that wishes faith and science to remain in their separate corners. Moderator Ted Cabal notes this point, writing, “[RTB] may be swimming against the evolutionary mainstream, but [BioLogos] appears to be doing the same.”

What’s the right kind of distinction?

Christians sometimes cite Paul’s letter to the Romans to justify defending a creation model that proudly rejects mainstream science. “Do not be conformed to this world, but be transformed by the renewal of your mind,” Paul writes. But Christians acting on the call to embrace their differences from the world must be cautious to apply this mandate in the right way. After all, the young-earth group Answers in Genesis uses this verse liberally on its blog, as if it defends any and every area of disagreement with mainstream science.

Kevin Nelstead, author of Earth Science: God’s World, Our Home, wisely warns the readers of his blog not to get too carried away with this line of thinking. He references the first letter to the Corinthians, which states that “the wisdom of this world is folly with God.” Applying this scripture to the creation debate, Nelstead writes, “Let it be the foolishness of the cross that people reject, not our own foolishness.”

In other words, as Christians, we have to stay both humble and vigilant. If non-believers can’t bring themselves to accept the gospel, it should be because of the radical good news that Jesus is the Son of God and Christ our Lord — not because Christians struggle to reconcile science and the Bible.

Thankfully, both RTB and BioLogos have embraced both of these qualities, as evidenced by the thoughtful commentary in this book. The humility of these authors even suggests that either camp would be willing to change its position on the question of evolution by common descent, if faced with enough scientific and theological evidence. Until then, we would all do well to follow the lead of these authors, speaking with one another about these questions from a position of love and grace. 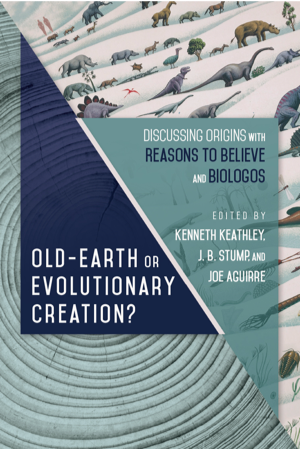 Discussing Origins with Reasons to Believe and BioLogos